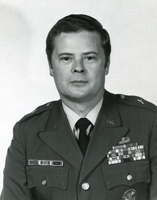 Don was born on July 31, 1933 into difficult times. After losing his Father at age five, and living in a children’s hospital for three years, he was placed in a foster home in Hamburg at age 11. After a year of Catholic school Don entered HHS, the youngest member of the class of 1950. At HHS Don was all state in chorus, ran track, and was a member of the undefeated Bulldog football team. Upon Graduation Don entered the US Air Force which led to a competitive appointment to West Point. This was followed by an ME in Civil Engineering from Princeton, a JD from Georgetown, and a number of other advanced degrees in military science and engineering. As an officer Don was chosen to represent the US in the SALT talks with Russia, and to manage the construction of the Israeli Air Bases that resulted from the Camp David Accord. He also served two combat tours in Viet Nam. He was promoted to General in 1981. After leaving the military Don entered the Electrical Energy Industry, and became a highly successful Developer and Executive. Throughout his career he never stopped building dams, bridges, tunnels, and power plants. Millions of people all over the world have benefited from his work by way of fresh water, good roads, and reliable energy. He was an intellectual giant, a world class problem solver, and a Presidential advisor. In later years Don credited Hamburg, and the support and kindness he found there, for enabling him to overcome his difficult start and reach the highest levels in the military, education, and industry.