Mike and Gail Kaney started their life together in the Village of Hamburg in 1969 where they chose to raise their three daughters, Amy, Katie and Colleen. During those years phrases like… Be a good citizen”, “Make your community better place- volunteer”, and “If you see something you want changed — get involved”; were heard in the Kaney house. Simply stated, add value to your life and your community each and every day. Mike Kaney served as a medic in an Intensive Care Unit in an Evacuation Hospital during the Vietnam War. For his service, he was awarded a Bronze Star.

Mike’s community involvement through coaching youth sports starting in 1970 and continues today. Mike has been involved as a coach/director for Little Cagers Basketball and coach/director and president of Hamburg Junior Baseball League. He has also served as the Chairman of the Village of Hamburg Recreation Commission. Mike’s most rewarding coaching has come from his work with the Kyle Reid Challenger Baseball League. Mike researched and presented the idea for the league for children with special needs to the Hamburg Junior Baseball League. With their support and the support of Hamburg Central School District, The Reid Family, Town of Hamburg YES program, and adult volunteers, this program is entering its 17th season this year. Getting to know the kids behind the disabilities and their families has been a rewarding part of Mike’s service to youth. Mike’s work in real estate and with the economic development committee has lead him to be an active participant in the business community. This led him to start the Village Business Advisory Council (VBAC) during the Rte. 62 reconstruction project in Hamburg. He has also served as a Budget Ambassador for the school district. In the early years of her marriage Gail stayed at home raising their daughters. In 1984, she went to work for Lillian Brand, as her secretary in the Hamburg Central Pre-K program, working on behalf of young children and their families. Gail continued to work for the next 25 years in this capacity, being the first contact for many families entering the school district. During recent school events for her granddaughters, she can still pick out those familiar Pre-K faces…only on bigger bodies! Whether on the baseball diamond with the Challenger League, building numerous playgrounds or chairing the Hamburg Sno-Ball, Gail volunteers to support the Hamburg Community. Gail retired, or as she likes to say, “Graduated from Hamburg” in 2009. Amy Kaney Kane graduated in 1988 as a two-sport varsity athlete (gymnastics and basketball). She continued her education at Canisius College, BA’92, MA’94 in Education. She is married to Dr. Michael Kane and is the mother of three girls, Erin (’16), Megan (’18) and Abby (’21). Amy placed her teaching career on hold to raise her family. Along the way she has become a volunteer for the Hamburg schools. She became a member of the Hamburg Central PTSA and has held numerous volunteer/ leadership positions at UPES, Hamburg Middle School PTSA vice-president for 5 years, HHS Post Prom, a member of numerous district committees, Hamburg Bulldog Booster Club Board member, and Parent-Child Connection member. Outside of school, Amy was a Girl Scout volunteer and leader and manager for the Hamburg Monarchs G 02/03 Premier team. In 2016, Amy was honored with the Town of Hamburg Youth Bureau Mary T. Blakeslee Service to Youth Award. She will continue her volunteering within the district for years to come. Dr. Katie Kaney graduated in 1990 as a two-sport varsity athlete (tennis and basketball) and was a leader in the band and student government. Katie continued her education at UB, where she played basketball, served as VP of the Student Association and completed her BA in Biology and MBA in Healthcare. Katie pursued her doctorate in Public Health from UNC Chapel Hill in 2013. Katie has taken her family values to Charlotte, NC, where she is married to Rich Bassham and has a son, Gavin. Katie has been a volunteer for Hospice for over 20 years, served as President of Leadership Charlotte and serves on the Board of Directors of Loaves and Fishes, a local food pantry. She was recently named to join the UNC Public Health Foundation Board. She is currently Senior Vice President of Carolina HealthCare System. In 2015, Katie was awarded as one of the 50 Most Influential Women in Charlotte, NC. Though she is not in Hamburg, she continues visit often and supports Hamburg’s growth in numerous ways.

Colleen Kaney graduated in 1995 as a three-sport varsity athlete (tennis, basketball and softball). She participated in band and student government. Colleen continued on to SUNY Geneseo, BS’99 in education, receiving her MS in education and MS in administration (LIFTS program) from the University of Buffalo. Colleen started her teaching career as a Pre-K teacher in 1999, moving to a special education teacher then a classroom teacher in Room 100 at Charlotte Avenue School. In 2009, Colleen became the Director of Pupil Services. She currently serves as Assistant Superintendent for Student Services, Curriculum and Instruction for the District. She is active in the Parent-Child Connection, Town Youth Board and a member of Leadership Buffalo Class of 2012. Colleen was recently named to the 2016 Business First “40 Under 40”. She feels blessed every day to be giving back to the community that gave so much to her growing up. It is an honor to be part of this community and serve together to help it be great- Go Bulldogs! 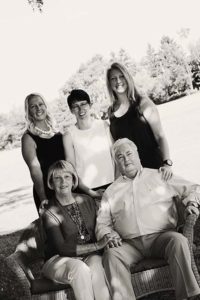