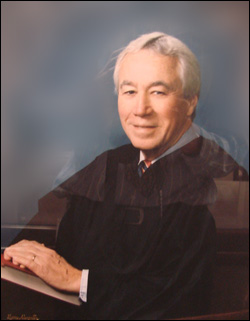 Born in Buffalo, New York on December 15, 1926, Leo Fallon was one of seven children of Edward and Leone Fallon. It was not long after his birth that the family moved to Hamburg. Leo graduated from St. Peter and Paul’s grade school in 1940 and Hamburg High School in 1944. He enlisted in the United States Army Air Force in 1945 and served until being honorably discharged as a staff sergeant in 1947. After leaving the Army Air Force, Mr. Fallon attended St. Bonaventure University where he graduated cum laude in 1950. He then entered the Cornell University Law School where he was selected to the Board of Editors to the Cornell Law Quarterly and also elected to the Order of the Coif. He graduated with distinction in 1953 and was admitted into practice in November of that year. Mr. Fallon was appointed Assistant U.S. Attorney by President Dwight Eisenhower in 1957 and became a partner in the law firm of Offerman, Fallon, Mahoney & Cassano. He was subsequently elected Hamburg Village Justice, where he served 12 years. In 1972, he became Hamburg Town Supervisor, serving five consecutive 2-year terms. During that time he was elected the first chairman to the Waste Water Treatment Facility in recognition of his efforts in obtaining federal and state funding for the construction of the treatment plants. In 1986, Judge Fallon was elected to a 12-year term on the New York State Supreme Court. During that time, Mr. Fallon was appointed to the Appellate Division’s Fourth Department where he served until 1998.